Posted on September 6, 2010 by Michael Dobkins

Main Street in Seal Beach  has been a favorite subject for photographers throughout its 95 years of history.  Every Monday between now and the end of the Seal Beach Founders Celebration, we’ll be posting a different image of Main Street.

This is probably my favorite historical photo of Seal Beach for a number of reasons.  Firstly, this was the photograph I first blew up in Adobe Photoshop to discover new details not immediately apparent at the original size.  The wealth of information waiting to be discovered in this image was enthralling, and I became obsessed with collecting more historical Seal Beach images and using computer imaging to uncover more hidden secrets and connections in each photo.  Looking closer became my mantra for this new hobby.

For example, this photograph was undated when I first encountered it while I was editing the Seal Beach Historical Society’s newsletter. Judging by the vintage automobiles, it’s obviously from the teens, but pinpointing an exact year seems impossible.  However, if one takes a closer look at the billboard behind the parked cars on the right: 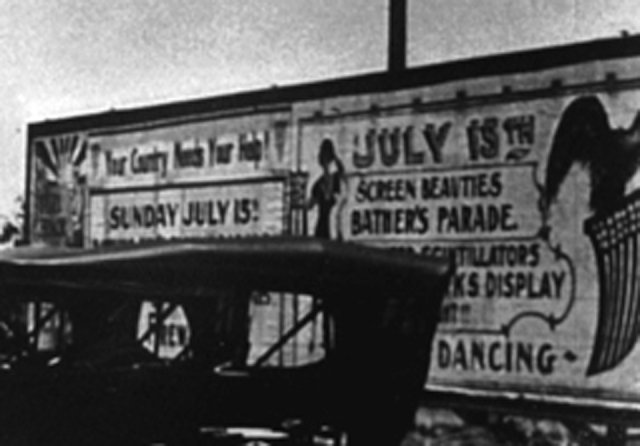 “Your country needs your help!” narrows this down to after the United States had entered World War I, but the “Sunday July 15” allows us to check a calendar to find a specific year in the teens when July 15th was on a Sunday.  So we can now date this photograph to some time in the Summer of 1917.

That’s not all.  The billboard is also advertising dancing, a fireworks display, and the scintillators, the spotlight display which were installed on the end of the pier (we’ll reveal more about those in the next few weeks).  The mention of the “Screen Beauties Bather’s Parade” connects this billboard with another famous Seal Beach photograph from panorama photographer Miles Weaver:

Moving on from the billboard, let’s take a closer look at some of the details on the left side of the image:

There’s this building with some sort of odd metal work on top.  When we flip the image:

We now see that the metal signage spells out “Lodge Cafe” to advertise the business to motorists and pedestrians at the other end of Main Street.  Here’s a couple of postcards for the Lodge Cafe:

A wildly inaccurate view of Main Street obviously draw by someone who had never actually visited the location or seen a photograph of the building.  I love all the trees and how Long Beach and Wilmington have been artistically removed from the landscape between Seal Beach and San Pedro. 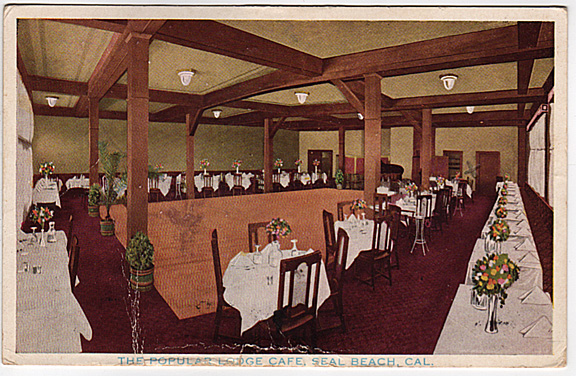 Here’s a more accurate view of the interior of the Lodge Cafe showing the dining tables and the dancing floor.

When we move up closer to the foreground on the left side of the image, we see a business that was also featured in the background of the photo from last Friday’s post:

The Seal Beach Pharmacy once filled the storefront that Clancy’s Saloon now occupies.  In 1917’s Seal Beach, it was your one stop shopping destination when you needed drugs, ice, Kodak film, Coca Cola, and a scale to weigh yourself to see if you were trim enough for the next screen beauties bather’s parade.

Judging by the flags flapping above, it seems like it was a windy day when this photo was taken. Is the women being escorted by the gentleman is holding her hat to prevent it from being blown off?  Or perhaps she is camera-shy and doesn’t want her face captured on film?

Along the bottom of this close up, you can see two grooves in the road, which leads us to our last magnification of this Main Street image: 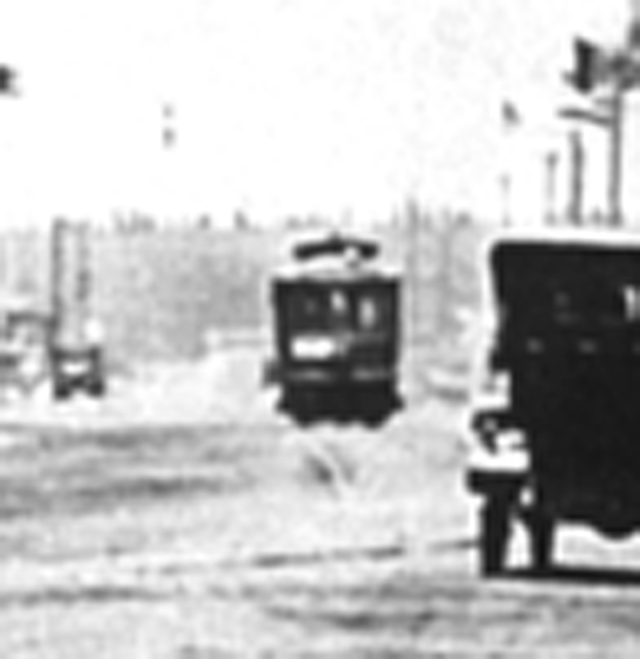 Saving the best for last, this is one of the three images showing a Pacific Electric red car traveling down Main Street that I’ve been able to find after years of searching.  Those two grooves were actually the trolley tracks for the trolley.