We Will Go To The Moon…

Posted on September 14, 2010 by Michael Dobkins

We choose to go to the moon in this decade and do the other things, not because they are easy, but because they are hard, because that goal will serve to organize and measure the best of our energies and skills, because that challenge is one that we are willing to accept, one we are unwilling to postpone, and one which we intend to win, and the others, too. – President John F. Kennedy, Rice University in Houston, Texas on September 12, 1962

This past Sunday, it was the 48th anniversary of the famous Rice Stadium speech quoted above.  Early in that same month, a groundbreaking ceremony was held just off Bay Boulevard for the S-II Saturn assembly and test facilities to be built by the Navy for North American Aviation’s Space and Information Systems Division.  This provides commemorative significance to today’s inspiring photo, which comes to us courtesy of Nancey Kredell. 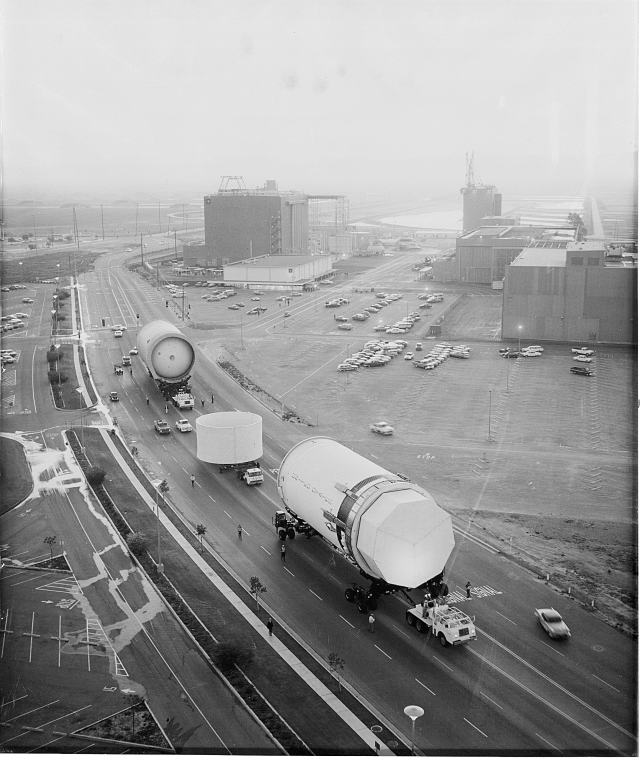 The next time you drive up Seal Beach Boulevard to the 405 freeway, dreading a long commute for a holiday family visit, a vacation road trip, or the rush hour stop and go conga to work, perhaps you can take some comfort in contemplating the really long commute each Saturn V S-2 rocket took going the opposite direction down Seal Beach Boulevard (still called Bay Boulevard back in the sixties).

What you see in this photo are stage components for a Saturn V rocket being driven down Bay Boulevard (renamed Seal Beach Boulevard in the late sixties) to Anaheim Landing where they will be loaded on a transport (probably the U.S.N.S. Barrow Point).  From Anaheim Bay, they embarked on a sixteen day journey that took them through the Panama Canal to a  testing facility in Mississippi.  Ultimately, they would end up on a launch pad at Cape Kennedy in Florida and would propel an Apollo spacecraft into outer space.

There’s a bit of a mystery about the above photograph.  The first stage in the foreground is a Saturn S-II rocket manufactured in the North American Aviation Assembly plant building in the background.  The second component is the interstage engine skirt that would protect the S-II’s engines during separation from the first stage rocket after take-off.  The third component is much harder to identify.  It could be a Saturn S-IVB stage rocket that had been manufactured at the Douglas Aircraft plant in Huntington Beach that was returned to Seal Beach for shipping to the Kennedy Space Center on June 13, 1966.  Or it might be a F-1 rocket engine that was shipped with a Saturn S-II on February 2, 1968.  Or it could be some other component and date I haven’t been able to discover in my search through NASA documentation.

I’m hoping a more technically adept Apollo expert will provide more information (and/or corrections) to clear up this mystery in the comments.

As an added bonus, here’s a color film footage taken from a Saturn S-II stage while in action.  This was filmed on November 9, 1967 during Apollo 4’s unmanned test flight mission.  First you’ll see the first stage (S-I) separate from S-II, and then the interstage engine skirt separates from the actual S-II.  Finally, from the other end of the S-II, you’ll see the S-IV separate from the S-II.

Be sure to check back each week for more historical photos and stories of Seal Beach.
– Michael Dobkins

12 Responses to We Will Go To The Moon…