Posted on October 7, 2010 by Michael Dobkins

This image comes to us care of a past Seal Beach resident, Bob Robertson. The photo was taken by Bob’s father, Bill Robertson, owner of the Seal Beach Post and Wave newspaper. 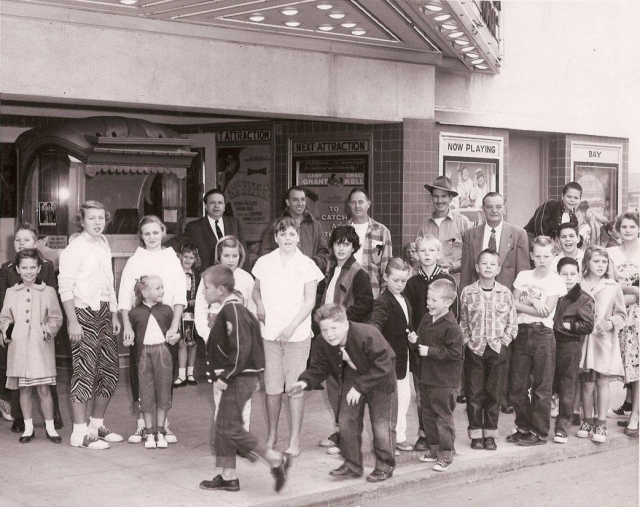 The Bay Theatre was built in 1947 and survives today as a rare single screen survivor in the age of multiplex theaters and high definition home theaters.

Movie posters for “Jupiter’s Darling” and To Catch a Thief are hanging in the “next attraction” frames next to the box office.  There’s a possibility that this is early 1956 since movies weren’t released as wide and stayed in circulation much longer than today.  “Jupiter’s Darling,” released in February 1955, starred Esther Williams and Howard Keel and was a notorious box office flop for MGM.  “To Catch a Thief,” released in September 1955, is considered a classic Alfred Hitchcock film by many and starred Cary Grant and Grace Kelly.

Does anyone out there recognize any of the people in this photo or remember what the occasion was?  And while we’re at it, why don’t you share your favorite memories of the Bay Theatre in the comments?

ADDENDUM:  Does anyone remember a Hollywood film being shot on the hill before the homes were built, and then the film being shown at the Bay after it was released?

Be sure to check back every for more historical photos and stories of Seal Beach.

11 Responses to Mermaids and Jewel Thieves