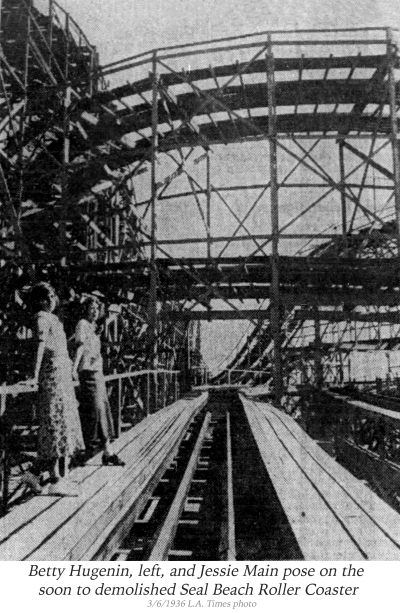 On this date in 1936, the Los Angeles Times reported that demolition of the Seal Beach amusement zone was underway.

Described as “one of Southern California’s famous pre-prohibition amusement centers,” the land was to be converted to a “swanky subdivision” with ocean frontage. The roller coaster, a transplant from the 1915 Panama-Pacific International Exposition in San Francisco (most likely just the design and the rails, the wood was provided by a Long Beach Lumber company), the fishing pier (already damaged in a 1935 storm), and the Jewel City Cafe were all to be razed. It’s safe to assume that the scintillators and the pavilion were also scheduled to be destroyed, but the Times story didn’t mention them.

(For some reason the damaged pier wasn’t actually demolished until 1938 when the city successfully litigated to take ownership. A new pier was finally built in 1939.)

All this prime oceanfront real estate had been the property of the Bayside Land Company, a company owned by Phillip A. Stanton and other Seal Beach founding fathers, but the prosperity that seemed so imminent when the city incorporated back in 1915 never fully arrived. Prohibition, the Spanish Flu epidemic, malfeasance from contractors and licensees, stiff competition from other cities, and finally the Great Depression all held Seal Beach back from taking off the way the Bayside Land company stockholders and other city founders had envisioned twenty years earlier.

A significant portion of Seal Beach real estate remained empty and undeveloped. The amusement zone fell into disuse and disrepair, and the pier and the rest of the beachfront no longer attracted crowds. Finally, Security First National Bank took over the Bayside Land Company’s holdings in foreclosure sale held in August 1935. Those holdings was said to make up nearly 50 per cent of the city.

Management at Security First National Bank had a different vision for Seal Beach, one that is still recognizable in modern day Seal Beach. A program of civic improvements and new construction was launched to enhance the community.  The bank installed The Dickson Realty in the old Bayside Land Company Building at Ocean Avenue and Main Street with an exclusive contract to sell the bank’s Seal Beach holdings. Once again, Seal Beach’s future seemed filled with bright possibilities.

And the era of Seal Beach as a seaside amusement attraction was done. It began in full force with a grand opening on Saturday, June 10, 1916 and ended with wrecking balls in early 1936 without even lasting a complete twenty years.

Still, the romance and giddy promise and excitement of those early days of Seal Beach lives on our imaginations.