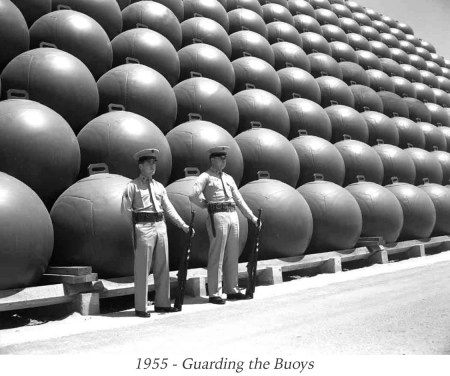 On this date in 1965, The Long Beach Independent Press-Telegram reported that a familiar Naval Weapons Station landmark on the corner of Pacific Coast Highway and Bay Boulevard (Seal Beach Boulevard today) would soon be gone.

The landmark was the stack of anti-submarine buoys stored on the base since World War II. The buoys had once been an effective barrier for enemy submarine gaining entry into California harbors. Modern submarine technology no longer needed such close proximity for attacks, and the buoys were ultimately declared obsolete. 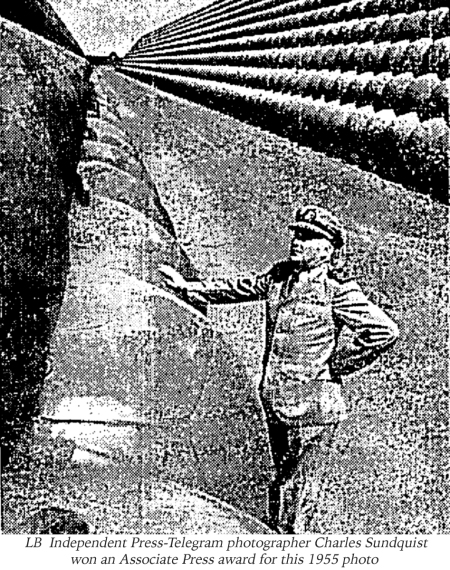 For the better part of two decades, the buoys sparked fears that they would explode a scant few feet from Pacific Coast Highway traffic and opposition from developers and realtors who felt those fears hurt Seal Beach property values. But these were buoys, not weapons or munition, and the only thing explosive about them was the interest of photographers itching to use the buoys in cleverly composed images for newspapers and local publicity.

In early 1965, the Department of Defense announced that the obsolete buoys would be auctioned off with the expectation that the winning bidders would have the buoys cleared from the Naval Weapons Station by late May. This expectation was partially fulfilled. 17,000 buoys were sold and carted off mostly to be used for scrap metal, and 5,000 remained in symmetrical stack formation to continue intriguing and vexing residents and motorists well into the seventies.

I have a line out to the the weapons station to find out when the remaining buoys were finally removed. I’ll update this post if I get an answer.

Can’t quite picture where the buoys were located? Click here to view a 2010 post that pinpoints the location.