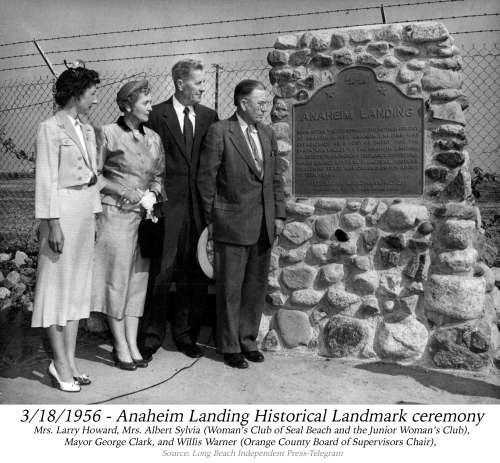 On this date in 1956 at 2 p.m., on the spot where Bay Boulevard met Electric Avenue, a dedication ceremony was held for a monument designating Anaheim Landing as a historical landmark. The marker read:

ANAHEIM LANDING After the establishment of the Mother Colony at Anaheim in 1857, a wharf and warehouse were constructed at the mouth of Anaheim Creek to serve the Santa Ana Valley. Treacherous entrance conditions caused several disasters, but steamers loaded with wine, wool and other cargo continued to dock here regularly. Use of the seaport began to decline in 1875 with the incursion of the Southern Pacific Railroad into the area. By 1890, the landing was no longer in operation.

(This was not the first Anaheim Landing. The landing was originally established in 1864 on Alamitos Bay, a more ideal port for shipping, but when an 1867 flood filled the bay with silt and severely limited ocean access, the landing was relocated to what is now known as Anaheim Bay. Local historian Larry Strawther has established that the original landing was approximately where the Island Village tract is today.)

Eleven years earlier almost to the day of the dedication ceremony, Anaheim Landing’s days as a civilian shipping port, a recreational destination, and residential neighborhood ended when the U.S. Navy took possession of Anaheim Bay and Anaheim Landing to install a weapons depot. On the other side of the fence behind the marker, munitions were loaded and unloaded to and from Navy ships serving in the Pacific Ocean.

On the civilian side of the fence, a crowd celebrated Anaheim Landing’s past. Perhaps some in that crowd had been Anaheim Landing residents and felt wistful recalling earlier days of swimming, boating, and fishing in the bay before the Navy removed their homes and cottages and dredged it.

Installing the marker had been a community affair. The project was instigated by the Senior and Junior Women’s Clubs of Seal Beach. Mrs. Bernice V. Smith and Mrs. Sven Lindstrom researched the historical data. Buell Brown designed the seven-foot high monument. Frank Curtis poured the foundation. The local Girl Scout and Cub Scout troops and Veterans organizations gathered the stones that were used in the monument, and surplus stones formed a crescent shaped rock garden on either side of the monument.

The theme for the ceremony was “Preserve the Past for the Future.” Scout troops presented mixed colors, Mrs. Noel Chadwick gave the devotional, and the Woman’s Club chorus sang a musical piece under the direction of Mrs. Clyde Spencer.

Officiating the ceremony were Willis Warner, chairman of the Orange County Board of Supervisors, Lee Winterton and William Gallienne of the Associated Chambers of Commerce, Admiral John McKinney, William Hynds of the recreation development committee, M.K. Hillyard of the marker committee, and Mrs. Albert Sylvia of the Woman’s Club of Seal Beach, and Mrs. Larry Howard of the Junior Woman’s Club of Seal Beach.

It must have been fine and proud Saturday event for all parties involved.

The Anaheim Landing monument still stands today, but somewhat diminished. Bay Boulevard is now Seal Beach Boulevard, the monument was moved to make room for a public works lot, and the rock garden is gone, replaced by a couple of bushes and a bus stop.