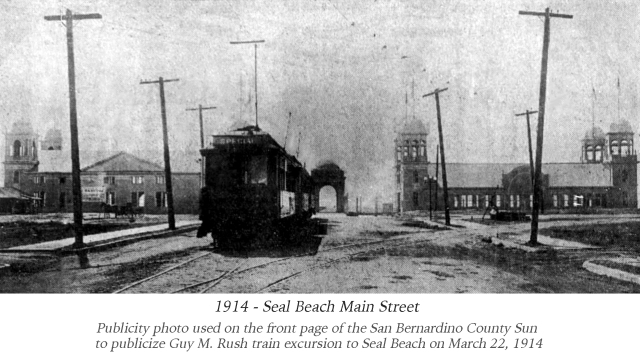 On this date in 1914, hundreds of people embarked on a Sunday excursion from San Bernardino to Seal Beach sponsored by the Guy M. Rush Company as represented by Edwin R. Post. If the San Bernardino Country Sun’s estimate is to be trusted, there were “over 125 people from San Bernardino, nearly as many from Redlands and nearly 225 from Riverside.”

The sale of real estate is indelibly entwined in almost all aspects of Seal Beach history and this excursion, the first of two in the early part of 1914, was no different. In publicizing the excursion, Seal Beach was described as “growing rapidly and is one of the great attractions in the Long Beach district” and also as “one of the last close-in beaches of a desirable character.” Folks who were “interested in securing this class of property” were “were invited to see it and get first hand information as to its beauties and advantages.”

The promotional copy style seems stilted today, but the sales concept is familiar to anyone who has ever sat through a timeshare sales presentation for a “free” dinner or chance to win a big screen television.

The marketing plan was to entice potential buyers to Seal Beach with its new bathhouse and pavilions with promises of food and fun, but once they were stuck in town for the day, there were real estate salesmen close by, each ready with a hard sell pitch and a contract.

For a mere dollar, excursionists would leave the Salt Lake station in San Bernardino at 8 am and ride to Riverside and then on to Long Beach. They would then take a Pacific Electric car for short ride a few miles east to Seal Beach. Waiting in Seal Beach was a free bathing suit for a dip in the ocean, a free lunch, and a free band concert, and you can bet that at every point where something free was given, somebody would be there to give a speech, make a pitch, or point out the available lots.

(If you’re tempted by all this to feel a nostalgia for a simpler and more innocent times, take note of the the odious words, “Rigid race restrictions” openly listed as one of Seal Beach’s selling points in the last ad in this post. Nostalgia is a harsh mistress.)

This excursion was just a few months after Bay City had been renamed Seal Beach and a year and a half before the city was officially incorporated by election in 1915. The roller coaster and the rest of the amusement zone attractions wouldn’t be built until 1916. Most of the features and landmarks that stood out from this era of Seal Beach’s past don’t exist yet.

Still, to someone from San Bernardino and its typical inland high temperatures, just standing on the edge of the Pacific Ocean and feeling a cool sea breeze brush across your face must have been a treat. 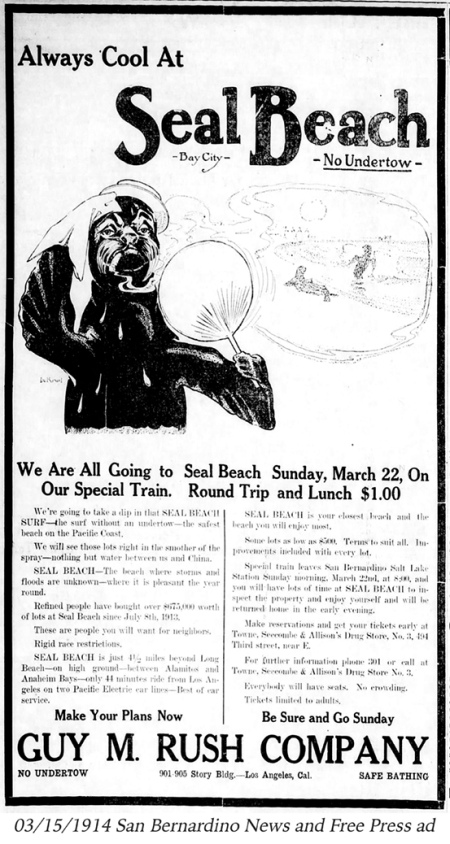