On this date in 1958, the first Miss Seal Beach was crowned.

Nitpickers could argue that she was not the first Miss Seal Beach, and technically there’s some truth to that.

On June 5, 1924, a grunion festival featuring open air dancing on Seal Way to a 45-piece band, bon fires and marshmallows, and a grunion hunt, was held. Also listed for the grunion festival was an event billed as a wedding ceremony of Miss Seal Beach and Mr. Long Beach. No other details were given, but I assume the marriage was purely symbolic civic boosterism.

In 1926, twelve year old Norma Barraclough of 148 Seventh Street portrayed “Miss Seal Beach” as part of an elaborate celebration of the opening of the state highway from Huntington Beach to Laguna Beach. Starting in Long Beach, a “Miss Long Beach” boarded a boat on motorized wheels that journeyed down the coast to Laguna, stopping at each city along the highway to pick up a young girl, ages ranging from eight to twelve, representing that locale. (Coletta Dean portrayed “Miss Sunset Beach.”)

In 1930, an unnamed “Miss Seal Beach” garnered at least 18,300 votes in a county-wide popularity contest to decide who would be queen at the American Legion celebration in Brea on Labor Day, but Lucille Brawley of Brea was crowned queen with 55,300 votes.

It’s worth mentioning those previous Miss Seal Beaches of yesteryear in passing, but the one true first Miss Seal Beach, a local girl chosen in a local contest to represent the city for a year, was crowned in 1958 on April 5th.

I’ll share that first Miss Seal Beach’s name in a bit, but first let’s cover some details of the build-up to her crowning. It’s also important to note that in 1958, there wasn’t even a hint that Miss Seal Beach would become an annual tradition with some breaks in between) that continues to this very day. It’s doubtful that the event would have continued if she hadn’t fulfilled the role so well.

On March 21, 1958, the Long Beach Independent reported that an event billed as a “Glamourama” was to open the Seal Beach season that year. B.C. (Jimmy) Phelan, chairman of the event shared that the program would include a boat parade, a dance, and an art exhibit. The highlight of the event would be a contest in which a “Seal Beach Beauty Queen” would be selected. The winner would received a sportswear wardrobe, a trophy, and a modeling course. Two runner-ups would also receive trophies. 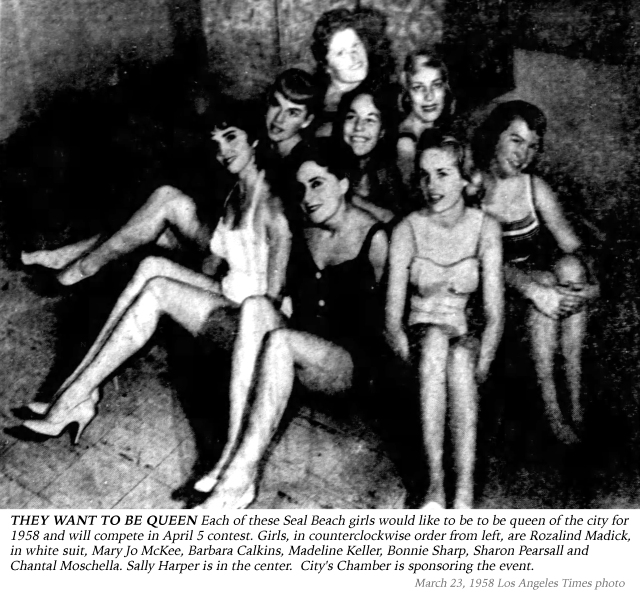 The ten contestants were paraded on trailer-mounted boats “through the principal streets of Seal Beach” at 12:30 p.m., and the contest would be held at the entrance to the Seal Beach pier at 2 p.m. Mayor Paul Calvo would welcome the contestants, and Harvey Wagner would act as MC for the entertainment and also perform as a singer.

So who was the first Miss Seal Beach? Meet Christie Sexton.

Ms. Sexton shared the following personal account with me in an 2015 e-mail:

It was a big deal at the time; with parade down Main St., etc.. As a side note, I happened to win the contest, much to my surprise, and it really helped form who I became as an adult; giving me much more confidence, etc. I went on to model for a short time, thanks to one of the prizes being a modeling course at Elda Berry Modeling School in Long Beach, and the Miss Orange County Fair contest, 1958. I did not win that contest (won by Miss Brea).

My interests were mainly on swimming and tanning with the gang at our 10th Street beach hangout and my part-time job at the café at end of the pier…The pageant frowned on getting tan, and it was difficult to drag me away from the beach for photo shoots, promotional events, etc.

One highlight of that year was representing Seal Beach on the Dude Martin TV show. My escort was Alan Harbour. We had to both leave our respective girl/boyfriends, and travel in, I believe, Alan’s Corvette, to Hollywood. We had a great dinner after the show at Diamond Jim’s on Hollywood Blvd. Both Doug Buell (my boyfriend) and Pauline DeSadeleer were not too happy about Alan and me spending the day in Hollywood without them. LOL.

After the year as reigning queen, I was happy to give up my crown at the 1959 pageant held at McGaugh Elementary School to a beautiful girl named Vickie.

I did not pursue modeling or the “phoniness” of pageants and went on to have a rewarding career in the executive secretarial and marketing/sales fields, in addition to raising two daughters. After over 50 years of working I finally retired this past January from Pima Community College in Tucson, AZ. I have fond memories of my Seal Beach days and I guess, in my heart, I will always be a Seal Beacher!

Ms. Sexton later clarified that Alan Harbour was a city employee at the time, and the city had requested that he accompany her to the Dude Martin show.

She was also kind enough to share a clipping from the April 6, 1958 Long Beach Independent that showed her holding the very first Miss Seal Beach trophy (it was made of brass!) and a photo of her crowning the second Miss Seal Beach, Vickie Larrain, in 1959. (It’s an oddity that the only two contestants missing from the Los Angeles Times photo in 1958 went on to become the first two Miss Seal Beaches.) 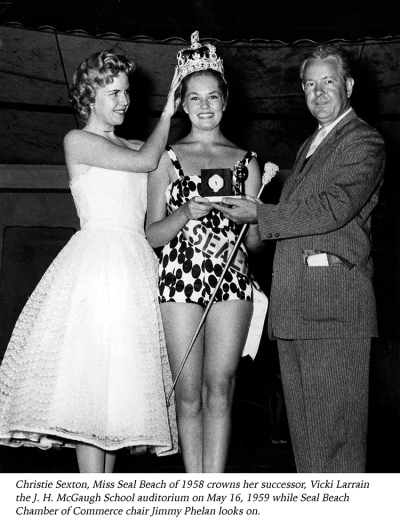 On a personal note, I’d like to thank Ms. Sexton for her generosity in sharing her memories of the event and her years as Miss Seal Beach. I had wanted to cover this event back in 2015 for the centennial, but I couldn’t find any clear images in the newspaper archives.

It’s been four years and Ms. Sexton has been very patient, but with her images and the one I found from the Los Angeles Times, Christie Sexton’s Date with Seal Beach History can finally be told.