On this date in 1910, according to the Santa Ana Register, the season opened in Bay City and  many people visited, wearing “warm weather clothes.” One thousand patronized the bathing and boating at Anaheim Landing. At the other end of town, “accommodations were taxed to the utmost,” and the bathhouse manager reported that all bathing suits were in use by noon. Mr. and Mrs. Harry Dyer of Anaheim arrived in their seven-passenger Cadillac, only one of the estimated three hundred “machines” that came over the new highway.

The Los Angeles Times shared essentially the same information with the same positive tone, but it’s interesting to note that there was very little effort put into promoting Bay City real estate in 1910. While you could find lots for sale by individuals in the newspaper classified ads, there were no ads extolling the financial and recreational virtues of buying Bay City properties. In comparison to earlier years of Bay City’s history and the marketing bombast that was to come with the renaming to “Seal Beach,” 1910 was an extremely sedate time for Bay City.

The Times also mentioned that Phillip A. Stanton, speaker of the California state assembly was relaxing at “Owl’s Nest,” his summer home in Bay City, before diving into a busy work week. Stanton was a major force in establishing Bay City, a primary shareholder in the Bayside Land Company, and is best known today as the father of Seal Beach. 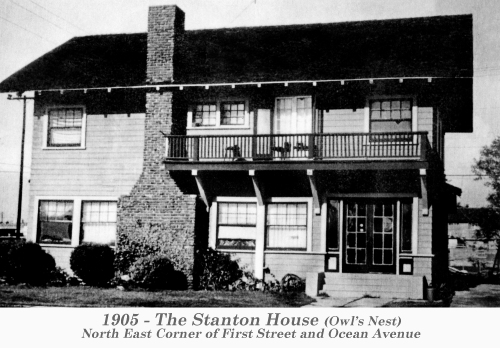 In 1910, Stanton was likely neglecting his Bay City real estate interests while running for California governor in the Republican primary. He lost to progressive candidate Hiram Johnson in August, and Johnson went on to win the general election in November. 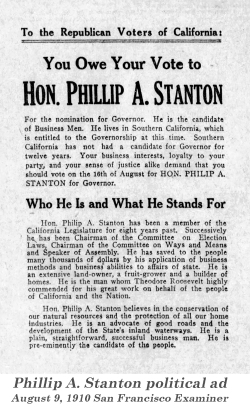 Stanton’s loss was probably Seal Beach’s gain. Would he have had the free time and the attention needed to relaunch Bay City as Seal Beach in 1913 if he was governor?