May 15th in Seal Beach History

On this date in 1954, two “kangaroo men” — as they were named in a headline in the next day’s Long Beach Independent — escaped from Seal Beach Police. John Johnson, the owner of the drugstore at 141 Main Street, was leaving work for the night when he heard noises from the roof above his store.

Johnson called the police department, and the dispatched officers scaled the building and confronted two suspects. The two men surprised the officers by leaping twenty feet to the ground and making a clean getaway in a car parked nearby.

Unfortunately, there were no wandering minstrels nearby to witness this and turn it into a famous folk song. 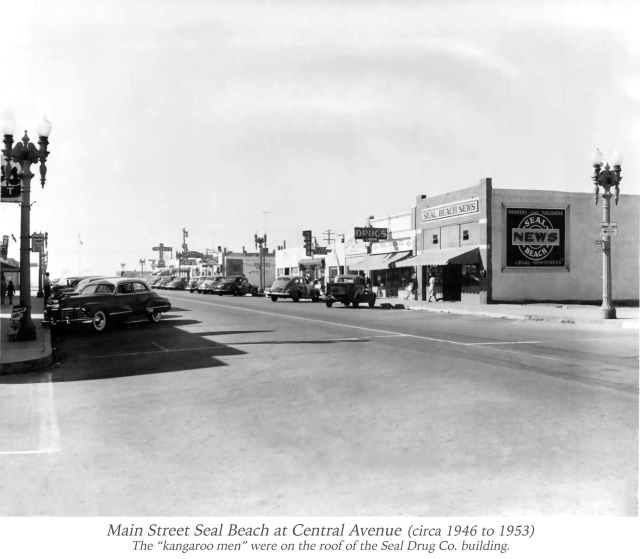 The Seal Drug Co. was located at 141 Main Street on the west side of the street where Bob’s Rexall did business for years and where Stitch and Feather has operated a “women’s boho boutique; a Dame’s Market” since 2013.

This photo can be dated within a seven year period from 1946 to 1953. Along the edge of the left side behind a street lamp, there is a glimpse of the Cole’s Market sign. Cole’s Market opened their Seal Beach location in August 1946 and included the address in advertisement until August 1953. By November 1953, a “Food King Mkt.” occupied 148 Main Street. (The market’s name expanded to John’s Food King later.)

This photo is filled with long-gone Seal Beach businesses that are little bit easier to see if you click on the image for a larger view.  Also, note the Pacific Electric red car tracks paved over down the center of Main Street.

Next to Seal Drug Co. was the Seal Beach News, an anti-gambling rival newspaper to the Seal Beach Post and Wave.  The short-lived Seal Beach News started circulating in 1946, but didn’t last long. It was gone before 1954 when a Baptist church took over that address.

On the other side of the Seal Drug Co. was a jewelry store (probably the actual target of the “kangaroo men” and The Friendly Nook, a yarn and wool store, at 137 1/2 Main.

Further down the street towards the pier is Frosty’s Shop, specializing in “Ladies and Gents Wear” and helping you “Look Your Best” and “Look Well-Dressed” with “Careful Cleaning,” according to the ad copy on a Frosty’s Shop matchbook. Frosty’s was owned by John C. “Frosty” Felts, an active member of the Seal Beach community and one-time president of the Seal Beach Lions Club. His name is spread across newspaper stories about Seal Beach community events from the thirties to the fifties.

If you ever rode on the merry-go-round that was installed on the east side of the pier, you’re familiar with his work. He spearheaded the 1947 fundraising and installation of the “flying wheel” as the chairman of public welfare committee of the Seal Beach Lions Club. “Frosty” Felts lived at 502 Central Avenue and passed away in 1956.

And, if you look carefully just past the Frosty’s sign, you can see the sign for the Circle Cafe. There are other stores and signs that unfortunately didn’t photograph sharply enough to read. One final curiosity is an advertisement for the Hollywood Record Club on the side of one of the Main Street buildings. This wasn’t a Seal Beach business, but a mail order record outfit similar to the Columbia House Record of the Month Club.

Even though this photo was taken before the rooftop chase described in today’s post, the Main Street it shows would have still looked much the same when those elusive “kangaroo men” made their dramatic twenty foot leap into Seal Beach history back in 1954.

4 Responses to May 15th in Seal Beach History