On this date in 1906, both the Los Angeles Times and the Los Angeles Herald ran this ad pushing the idea that Bay City (Seal Beach’s original name) was “to Be the Best Lighted Beach On the Southern California Coast” and promising that “Plans to This End Are Now Being Made and They Will Be Carried Out.” The ad also mentioned that “Four New Two-Story Cottages” were “Contracts for or Plans Drawn Last Week.”

There’s a weak irony that in publicizing so many two-stories, two Los Angeles newspapers ran the exact same single story. I hate to break it to idealists out there, but newspapers printing press releases as news is not a recent trend in journalism. In both stories, the new 1500-foot pier and a new hotel and store building were also mentioned, and, of course, the plans to make light up the beach.

“This is a pretty big contract, and the outcome is awaited with considerable interest,” noted the Times and Herald. The Times story concluded there, but the Herald added one additional sentence: The Bayside Land company has a habit of carrying out its promises.” 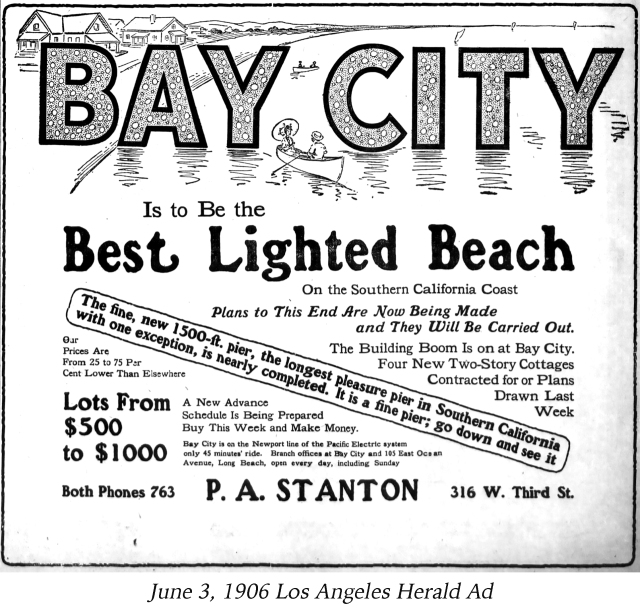 Also running on this date in both the Los Angeles Times and the Los Angeles Herald were two similar ads for Pacific Electric that mentioned Bay City. The ad copy is exactly the same but the layouts are slightly different with different choices in typography, so ad copy was probably given to each newspaper the ads themselves were designed in-house.

Both shared that Los Angeles people are fortunate because “If they chance to fare seaward they can get fast cars at almost any hour for San Pedro, the wonderful harbor, and for one Beach, the Atlantic City of the Pacific coast; for Alamitos Bay, Bay City, Huntington Beach or Newport.”

So Los Angeles people had that going for them. Which is good.

I’ve shared the Pacific Electric ad below for comparison. 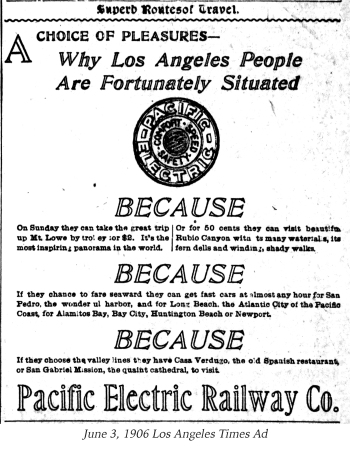 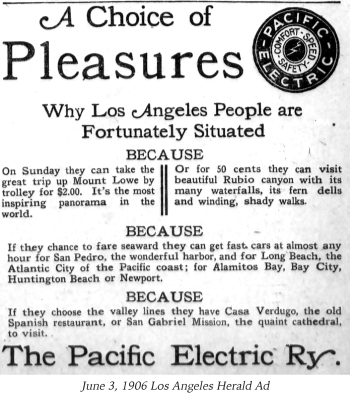