On this date in 1916, this article and these ads ran on the third page of a Seal Beach promotional section in the Santa Ana Register. This was on the Friday of the first opening summer weekend under the Seal Beach name, and this was the newly incorporated city at its most ambitious and confident.

The copy, ads, and illustrations are formatted below for easier reading and a larger view of the graphics. 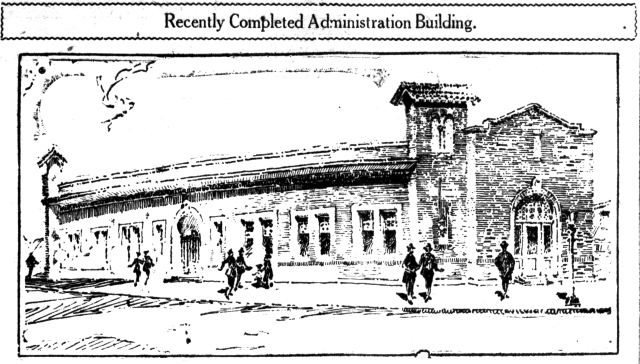 ADMINISTRATION BLDG IS A BEAUTIFUL STRUCTURE

The recently completed administration building on the corner of Ocean Avenue and Main was built and, for most part, is occupied by the Bay Side Land Company and its officers. P. A. Stanton is president of the company; I. O. Lothian, vice-president, and J. P. Transue, secretary. The main offices of the company were formerly at the Title Insurance Building at Los Angeles. The entire office paraphernalia was moved to Seal Beach almost two weeks ago.

The amusement department of the Bay Side Land Co., which is really a new department, is in the charge of Frank Burt — who was Director of Concessions and Admissions at the Panama-Pacific International Exposition — and Bert St. John, resident manager of amusements. Both gentlemen have a wide reputation as amusement managers and resort builders.

Mr. Burt has probably supervised the construction and opening of more amusement parks than any man in the country. It is for this reason that many of the zone concessionaires followed him to Seal Beach, thus giving the resort an exposition tinge throughout.

Mr. Burt is giving particular attention to the architectural harmony and the

arrangement of the buildings. This plan is new in the amusement line and follows as a result of the impetus given to architecture in its highest form at the great exposition. Heretofore but little attention was paid to harmonic layout at resorts, particularly in the erection of the various small concessionaires’ buildings, but at Seal Beach Mr. Burt sees to it that everything is constructed with regard for and in keeping with one set of plans.

Mr. Edwin Symmes, the architect who laid out a large portion of the exposition grounds and palaces, is co-operating with Mr. Burt so that there may be no irregularity and no unsightly crowding of buildings at Seal Beach.

Mr. Bert St. John, who acts as resident manager of amusements, is known as a theatrical director of wide experience. The Bay Side Land Company secured two live wires in Frank Burt and Bert St. John.

At present all streets are graded and oiled. It is planned, however, to asphalt them within the next year. Cement walks, water, gas, electricity and telephones have been installed for some time.

OPPORTUNITY TO INVEST GIVEN TO INVESTORS

Seal Beach, since the completion of the good roads system, is within easy access from every point in Orange County. This fact alone makes the “Jewel City’’ resort loom as the coming amusement and recreation center.he strides made during the past year – even the last three months — are more astonishing than the growth of Long Beach, and the claims the Robert B. Armstrong Company are making for Seal Beach as an investment center seem wholly within reason.

There is more building construction going on at Seal Beach at present than at any other place in Southern California. On the ocean front the various concessionaires are spending several hundred thousand dollars in an attempt to give Orange County the most up-to-date amusement center on the coast. The attractions brought down from the Panama-Pacific International Exposition are eliciting comment everywhere. Investors know such things bring the crowds, which, in California, is usually followed by a rapid Increase in population.

In the business section the largest and most important new structure is the Administration Building, the home of the Bay Side Land Company, which for most part is the owner of Seal Beach.

Another building is a two-story yellow brick erected by a Mr. Rosenthal.

A number of one-story stores have recently been completed on Coast Boulevard at the foot of Main Street.

two or three blocks. Property valuations have increased at a rapid pace and the type of buildings constructed are of a more expensive nature than is customary at beach resorts.

The standing population at this writing is about 1200, which runs to approximately three thousand during summer. This estimate takes into consideration only such as remain for a period of two months or more. Week-end visitors run into the thousands.

Robert B. Armstrong Company, who are selling agents for Seal Beach property, have been the big boosters of Seal Beach, which was known as Bay City when they took hold a little over two years ago. There was nothing there but a few houses, three or four stores and a small bath house.

There are but few business lots to be had at Seal Beach, but residence ing amusement and recreation center ¡lots may still be purchased on terms.

This year will be the busiest since Robert B. Armstrong Co. began their rejuvenation of old Bay City. The well-known realty firm is making preparations to take around droves of people and show them Seal Beach values this summer.

Following are a few reasons for buying property at Seal Beach, as given by the Seal Beach Chamber of Commerce:

“Seal Beach is a growing little city of about 1200 inhabitants, situated in the extreme southwest corner of Orange County, 26 miles from Los Angeles, and 16 miles from Santa Ana.

“While the city is still in its infancy, it shows great promise of becoming a city of beautiful homes.

“Graded and oiled streets, cement walks, water, gas, electricity, phones, stores, etc., that make up all the conveniences of a city are already established.

“Seal Beach offers an ideal place for a beach home with a commanding view of the Pacific Ocean on the south and west, Alamitos Bay on the west and north and Anaheim Bay on the east, and rich soil lots upon which to build, out of danger from high tides. Seal Beach has a great future before it, not only because it has all that any other beach has, but more, and is so easily accessible from all directions.

“Seal Beach is not only easy of access by the trolley routes but has paved boulevards leading to Santa Ana and Los Angeles and all the inland towns, and is the starting point of the Coast Boulevard to San Diego.

“Seal Beach is a safe place to come with your family; a safe beach, no treacherous undertow or tide rips, a quiet home beach with no saloons but with plenty of healthy amusements. If you live in Seal Beach it is the next best thing to a continuous vacation.

“A half mile either way from Main Street are the two still water bays, Alamitos and Anaheim. The flow of the tides in and out of these bays, breaks the currents along the ocean front, thereby preventing any undertow and at the same time furnishing an ideal place for canoeing, sailing, rowing, motor boating and swimming. Anaheim Bay is about four miles long and, with its arms has about ten miles of navigable water. Shell fish are plentiful. Prior to the building of the railroads, old Anaheim Landing was an important shipping point; later a village of fishermen, now a popular part of Seal Beach. At the mouth of the Bay there is a choice residence section known as Seal Court.” 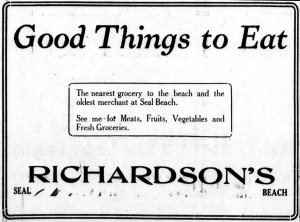 There are several apartment houses in Seal Beach. Largest and foremost among them, however, are the Wieland Apartments, Chris Wieland, proprietor. The building occupies a conspicuous location, with a commanding view of the ocean from the second floor. It is just a short block to the ocean from the apartments.

Mr. Wieland has been rushing work on a handsome new porch, which will be completed in time for the opening.

Check out the other seven June 9th This Date in Seal Beach history post. There are more ads, photos, and illustrations to enjoy.