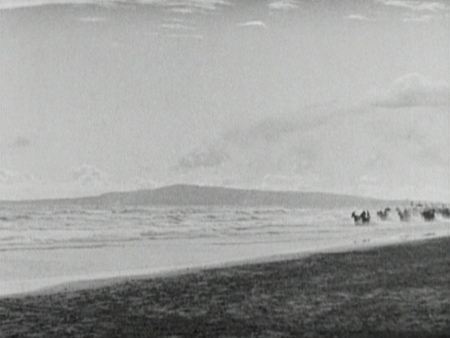 On this date in 1923, six hundred members of the “Lasky moving picture company’ arrived in Seal Beach to set up camp to film shots for a scene in Cecil B. DeMille’s biblical silent film, The Ten Commandments.

In the scene, the Egyptian pharaoh Rameses (played by Charles De Roche) and his soldiers chase after Moses (played by Theodore Roberts) and the Israelites in chariots to the Red Sea. All seems lost for Moses and his tribe with no hope of escape, but Moses’ faith is strong. 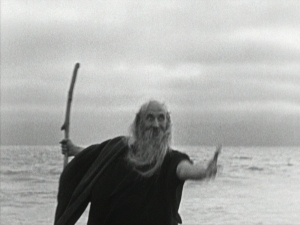 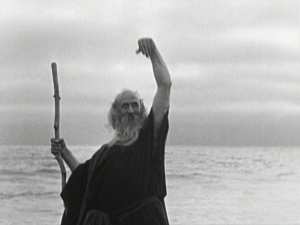 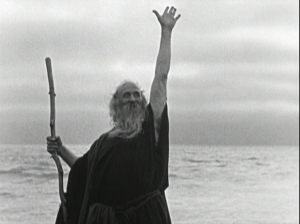 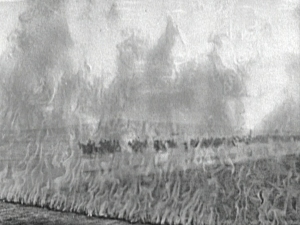 Moses gestures, and a pillar of flames bursts from the ground to block the pharaoh and his men from chasing further. Then Moses gestures dramatically, and the Red Seas parts to allow the Israelites to escape to the other side. 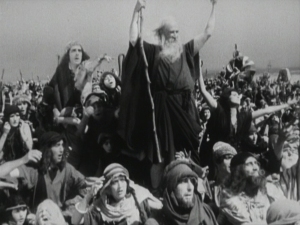 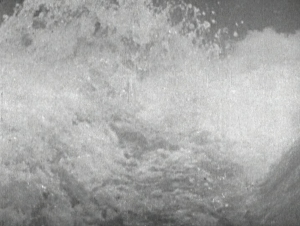 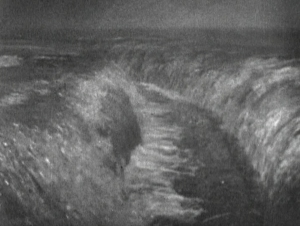 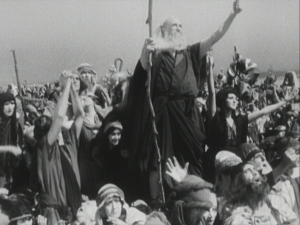 The pillar of fire then fades away. The Egyptians follow through the parted Red Sea until Moses makes another gesture, and the waters crash down upon Rameses and his men, drowning them. 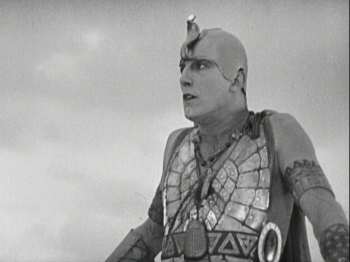 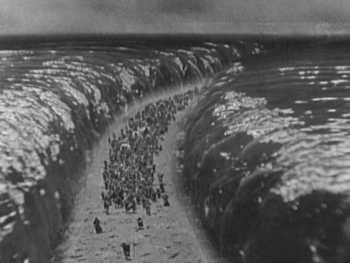 The actual filming in Seal Beach took place on Friday, June 15th. The Seal Beach shots were exclusively of the Pharaoh and his charioteers speeding across the surf of the Red Sea until halted by the pillar of fire (a special effect added later). The Egyptian charioteers and horsemen were played by regiment of the United States Calvary from Arizona, and San Pedro and Point Fermin can clearly be seen in the background in the completed film. 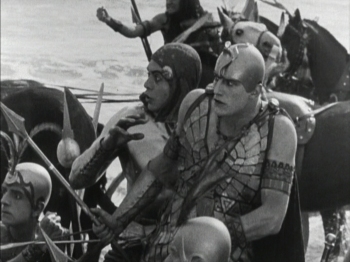 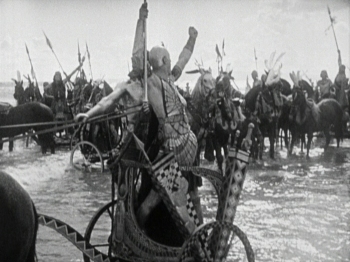 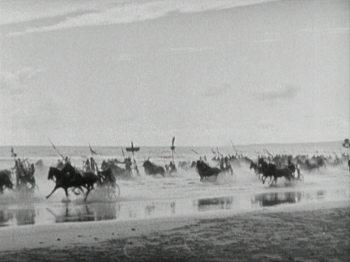 (Years ago, a long time Seal Beach resident told me that a photo ran in a local newspaper showing Ten Commandment extras in costume taking a break at the Joy Zone, but I’ve never seen it after years of searching.)

Here’s an eyewitness account published in the Santa Ana Register the next day.

SEAL BEACH, June 16. — Seal Beach has been swayed by a single impulse since the coming of the Lasky company, to witness the big scenes.

Friday afternoon at 3 o’clock the representative Egyptian host assembled on the beach beyond the Anaheim bay bridge, the gleam of oriental coloring in the costumes the numberless chariots with their prancing steeds, forming a wonderful picture against a background of breaking waves and the dim outline of Catalina Island.

The immense cameras were in place, the outriders had withdrawn and the hush of expectancy brooded over all. Then the peal of a bugle and they were off, the swaying chairs buffeted by the waves, the racing horses dashing through the spray, losing their footing, gaining it again, on and on, while the film clicked its record and the crowd forgot to cheer in the deeper homage of silence.

But one accident occurred and that of a minor nature. Many chariot wheels were left on the sands as mute evidence of the danger of the race.

Not all of the Red Sea sequence was filmed in Anaheim Landing. The shots with Moses and Israelites at the Red Sea were filmed in Balboa, and the actual special effect of the parting of the Red Sea was filmed in a studio with footage of Moses and his followers inserted between two towering mounds of molded gelatin. Portions of the chariot chase were filmed on the Muroc Dry Lake and in the Guadalupe-Nipomo Dunes. All of these shots were edited together to create one of the most memorable sequences in silent film history.

I’ve yet to uncover any account of Cecil B. DeMille directing in Anaheim Landing. This shoot may have been second unit filming, shot and directed by a second unit director. It’s possible that the medium shots of Charles De Roche reacting to the flames and the parting of the Red Sea were inserts also filmed elsewhere, but I believe I can see the faint outline of Point Fermin in one shot behind him before he makes the brilliant executive decision to lead his men into the parted Red Sea after Moses.

Would DeMille have allowed a second unit director to direct Charles De Roche’s acting in this crucial scene? I fear nothing short of a trip to the Harold B. Lee Library at Brigham Young University to dig through the Cecil B. DeMille papers to check the call sheets will give us a definitive answer.

It’s natural for people who have only seen Cecil B. DeMille’s 1956 biblical epic, The Ten Commandments with Charlton Heston and Yul Bryner as a mere sound and technicolor remake of the original 1923 version, but the silent version differs greatly in that the Moses sequence is only a prologue to a contemporary (in 1923) tale where modern folk engage in sinful activities before repenting in the third reel and committing to living by the Ten Commandments. This is about as dull as it sounds.

The idea to make a film based on the Ten Commandments came from a contest in which Cecil B. DeMille solicited ideas from the public on what his next picture should be. The winner was to be awarded a thousand dollars, but eight people (including Mrs. Peter Rasmussen of Long Beach, CA) suggested the Ten Commandments. DeMille shelled out eight thousand dollars and had his writer Jeanie Macpherson write up a scenario.

Good publicity aside, that eight thousand dollars was money well spent because the success of The Ten Commandments sparked DeMille’s career path as the preeminent director of biblical films, including the silent King of Kings (1927), The Sign of the Cross (1932), Samson and Delilah (1949), and culminating in the 1956 version of the Ten Commandments. DeMille made eighty-eight films, but he is best known today for filming lavishly epic bible stories.

The Ten Commandments opened on December 4, 1923 at Grauman’s Hollywood Egyptian Theatre and held the Paramount revenue record for for twenty-five years. 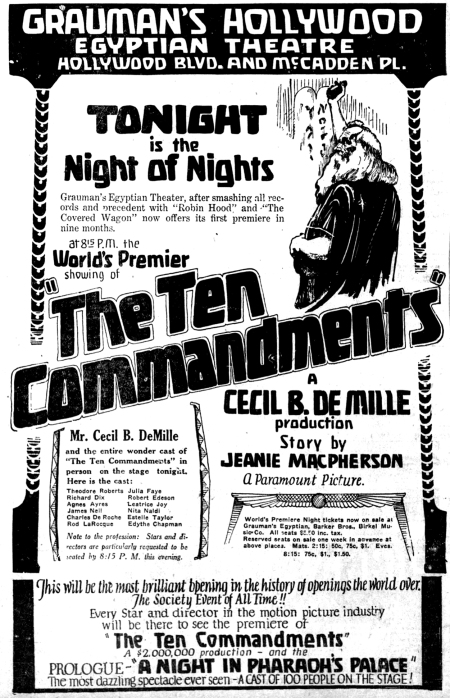 There’s one final interesting discovery to share about the 1923 Ten Commandments. In 1990, filmmaker Peter Brosnan discovered the magnificent Egyptian city set for The Ten Commandments buried in the sands of the Guadalupe-Nipomo Dunes. You can learn more by clicking on this online Smithsonian article. 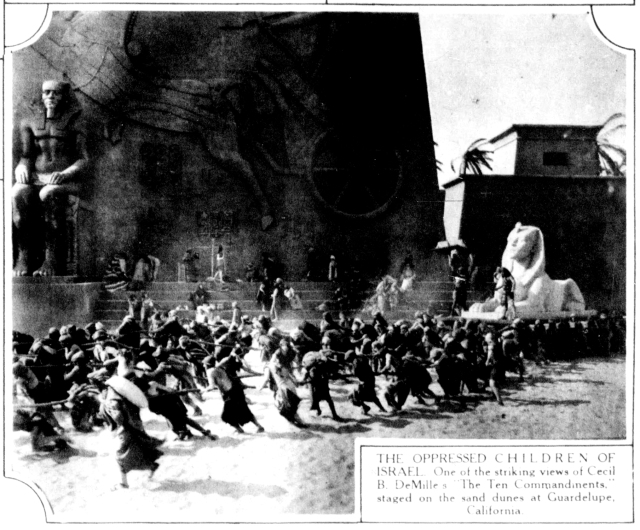 Finally, if you want to see how this all finally fit together, here’s the sequence: