On this date in 1960, the new lifeguard headquarters went into service on the Seal Beach pier.

The new headquarters enhanced lifeguard effectiveness in two ways. The higher vantage point from the pier allowed better visibility of distant swimmers and sharks venturing near to shore. The new headquarters and the seven lifeguard towers on the beach were also equipped with telephone for faster and more detailed communications and coordination between the stations. Previously the lifeguards used signal flags to communicate with each other.

2019 Addendum: I received this response from Steve Seymour to this post when it ran originally in 2017:

I think the tower in the pic is the 10th St Hq on the beach. Then it moved to 8th St on the beach, and after that to the current location, except it was single story with a rooftop observation deck accessed from street level where police bldg is now.   The tower on the pier, tower “zero”, was built mid 70’s I believe, and was never a headquarters.

The image above is from a July 14, 1960 Los Angeles Times story. The photo caption identified it as the new pier tower, and the article refers to it as a new headquarters that will help coordinate with the beach towers.

What Steve suggests seems likely when you consider the odd angle the jeep is parked. It makes more sense as being parked on the beach that being awkwardly positioned on the pier. Perhaps an editor who was never on the scene misidentified the photo and assumed that the pier tower was the new headquarters.

As for the pier tower, it might have rebuilt or remodeled in the 70s, but it was definitely there in the sixties as shown in the aerial photos below. 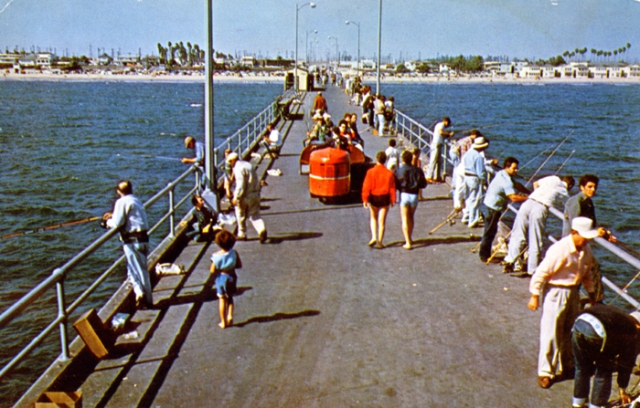 An added benefit for obsessive Seal Beach history buffs (like myself) is that photos showing the pier without a lifeguard tower can now be dated to no later than 1960. For example, this popular postcard was postmarked in 1962, but I’ve always suspected the photo itself was taken a few years earlier in the late 1950s. Now we know it was taken before the tower was built on the pier.

The tower stood on the west side of the pier as shown in this November 1963 photo.

Here’s a closer view of the pier from the same photo.

This tower was destroyed in 1983 when the pier was washed away by high surf. The current tower on the rebuilt pier was moved to the east side where it still stands today.