Posted on September 17, 2019 by Michael Dobkins

On this date in 1916, aviator daredevil Joe Boquel made a triumphant return to Seal Beach for what would be his final engagement for the city. Extra Pacific Electric train service to Seal Beach was scheduled to handle the extra visitors.

Boquel had been so successful at drawing crowds to Seal Beach in August 1916 that the Bayside Land Company had aggressively pursue Boquel to return for a second time. By this point, Boquel was even more famous and popular as a statewide celebrity. One secret of Boquel’s growing fame as a public figure was that when he wasn’t doing loops in the air, he had an exuberant and engaging personality and was willing to make appearances at community events and appearances. Everybody loved Boquel in the air and on the ground.

Seal Beach city boosters went full out to publicize Boquel’s return. On the morning of September 15, Boquel was met by hundreds of Seal Beach residents at the Southern Pacific Station. Boquel was then installed at the head of an auto entourage in a Packard Twin Six, driven by racing legend Barney Oldfield, and paraded through the streets of Los Angeles. Later in the afternoon, a procession of autos carried Boquel through Santa Ana, with twelve cars following the lead, a band, and waving flags and banners.

The Bayside Land Company wanted everyone to know Joe Boquel was back, and Seal Beach had him.

The Los Angeles Times account of Boquel’s arrival closes with a mention that following “his final appearance at Seal Beach, Boquel will journey East, where he is scheduled to fill many engagements in various large cities.” 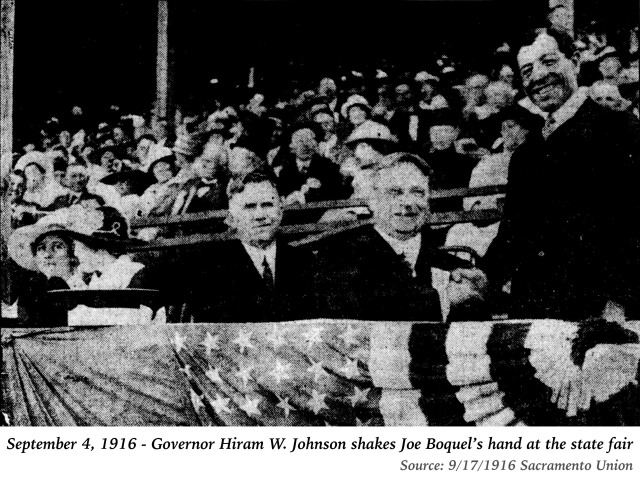 The September 17, 1916 Sacramento Union ran an interesting piece on Joe Boquel. Most stories on Boquel breathlessly describe his stunts and praise his aviation skills. The unnamed Sacramento Union reporter writing this piece actually interviewed Boquel. We’re given a rare glimpse into Boquel’s own thoughts about his work and confidence in his own abilities.

When asked about his success performing terrifying aerial stunts like “The Corkscrew” and “The Fallen Leaf,” Boquel said, “You can just naturally make yourself do things that don’t seem possible, and once you start, the excitement and fascination keeps you going until you have finished. When your task is completed you may be as limp as a water soaked sponge, but a rest will put you back into condition again.”

Boquel went on to explain that it is his belief in the power of the mind that will allow him to make a planned 32-hour drive in a specially built transcontinental auto to New York. “I’ll be able to go right ahead without any feeling of distress, though I expect to take a week to recuperate when I once reach New York.”

Boquel also shared details about his slow rise to fame. For ten years he worked as a mechanic and a bridge carpenter before getting an opportunity to fly. Four years earlier, Boquel learned to fly in an old-fashioned plane with an engine installed in the front. The plane ultimately exploded (one assumes on the ground, but the article doesn’t say), but Boquel had already learned the rudiments of flying. After that, Boquel spent three years developing skills and knowledge as an understudy to other pilots and was ready when he finally got a shot performing before the public on his own.

Boquel planned every stunt and maneuver beforehand. He told the reporter that he knows exactly what he want to accomplish and how to use the plane to do it. His “Fallen Leaf” stunt was based on the vivid account of a falling French aviator. Boquel figured out how to duplicate the falling effect deliberately, and falling seemingly helplessly for a thousand feet before righting his plane and resuming controlled flight became one of his signature stunts.

Boquel mentioned he was planning to debut a new stunt in Seal Beach called the “Merry-Go-Round” in which he will rapidly fly in revolutions similar to a motorcycle on a motordrome, tilted at a 40 degree angle.

When asked about retiring, Boquel said, “I know I’ll be in it as long as I can fly for there is a fascination about it I can’t resist. I think aeroplanes all the time. In the back of my head I think about them as I talk to you or anyone else. I think about them at night, and often get up in the morning before daylight to work on my machinery.”

The conversation then turned to his wife of ten years who never attends his exhibitions. Boquel banned her when she fainted after he was injured in a minor accident.

“Some day I might get mine. In that case, I would not have her see me mangled. It would be too hard on her.”

There will also be a final Boquel post in November covering his final flight in San Diego.