On this date in 1967, Hoyt Axton played at the Cosmos (formerly the Rouge et Noir). 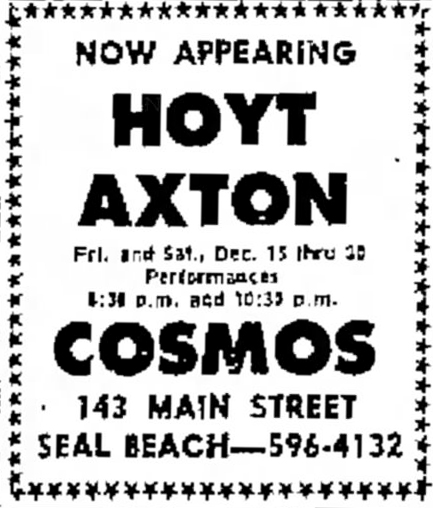 Today Hoyt Axton (1938-1999) is probably best known as the inventor father in “Gremlins.” the father of Alex Ramsey in “The Black Stallion,” or as the songwriter of the Three Dog Night hit, “Joy To The World (Jeremiah Was A Bullfrog).” A charismatic and affable performer, Oklahoman Axton was cast regularly on TV shows (Bonanza, WKRP in Cincinnati) and movies throughout his life. His musical career started in the early sixties and included 26 albums with the last one being released the year before his death. Music and songwriting must have run in his family — his mother was Mae Boran Axton, who wrote “Heartbreak Hotel.”

Back in 1967, Axton was trapped in a seven year contract to the Nikas brothers who owned the Prison of Socrates in Balboa, The Golden Bear in Huntington Beach, and the Cosmos in Seal Beach. He was a charismatic hard-drinking wild man, and when he had misbehaved enough to incur the wrath of the Nikas brothers, they would punish him by booking him at the Cosmos, a small venue where the amount of his share of the gate was much smaller than at the Golden Bear or the Prison of Socrates.

Wherever he was playing, Axton was a popular performer and would pack the house with fans. To give a flavor of the humor and energy of Hoyt’s live performances from this period, here’s a recording made at the Troubadour in 1966. Warning: The language and sexual attitudes might offend modern listeners.